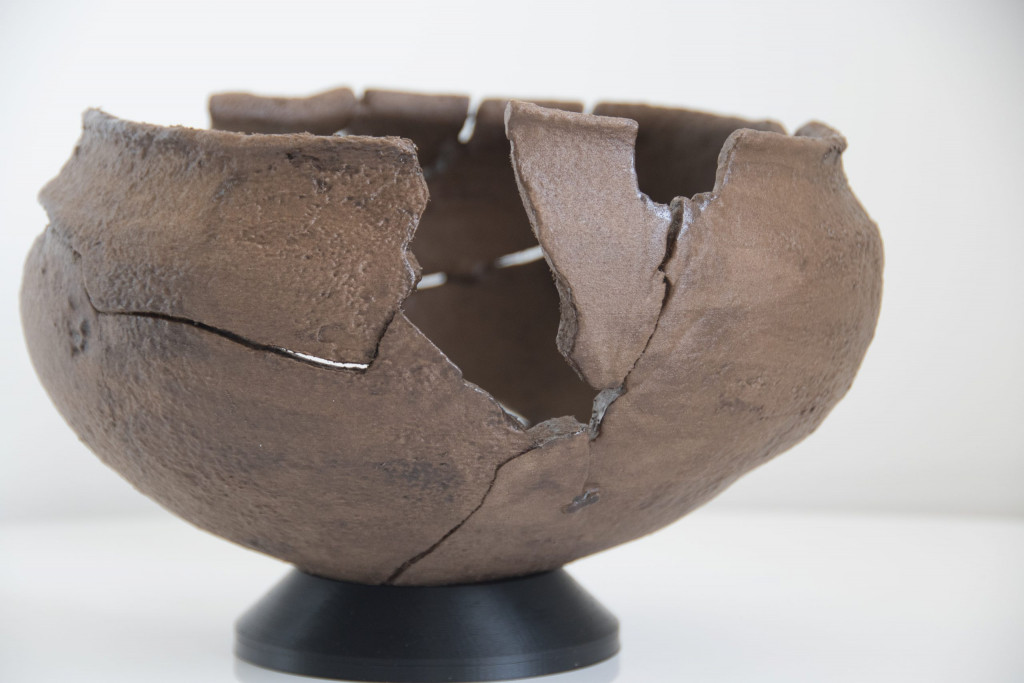 A little while ago we were lucky enough to be given by Martin Carruthers , the laser scan data of the Iron Age wooden bowl that was found at the Cairns dig in South Ronaldsay, Orkney. Martin is the site director at this dig and was responsible for the removal of this bowl from a ‘well’ in the Iron broch that they were excavating. For more information about the discovery, go to the Dig Blog

The Bowl was removed with the earth around it and was sent for conservation. The original item is too fragile even after conservation for much handling and so represented a great subject for recreating on a 3D printer.

After processing the 3D scan using the techniques that we developed with the photogrametry scans of the Ness of Brodgar, I thought this would be a good time to experiment with printing with Filamentaive wood filled PLA filament.

This filament is based on a standard PLA ( starch based ) plastic, but contains 40% of wood fibers. This can make it more difficult to print with and is more abrasive on the nozzle ( I use steel nozzles on my Raise 3D ) but the results are great, not only does it smell like smoldering wood when it prints but the finished object absorbs standard wood dye in much the same way as ‘real’ wood does. So after some experiments I printed a full sized replica and stained it with dark oak wood dye. I was amazed at the final result! Even the Iron age repair of a metal staple was visible.

I dropped Martin an email to ask when he would be about as I had something to show him. I was not expecting the reaction! Martin was delighted with the model and could not put it down. He called in almost anyone he could find at the Archaeology department of the university to show the bowl to. The level of detail impressed them and having the ability to hold and examine it was an experience that would not be possible with the fragile original.

We hope to make some smaller replicas to sell to raise monies for the Cairns dig. The full size version takes nearly seven days to print and so will only be available to order. We hope to have the model on display at the Cairns dig in the season.

Now approx half size replica for sale on our Etsy shop