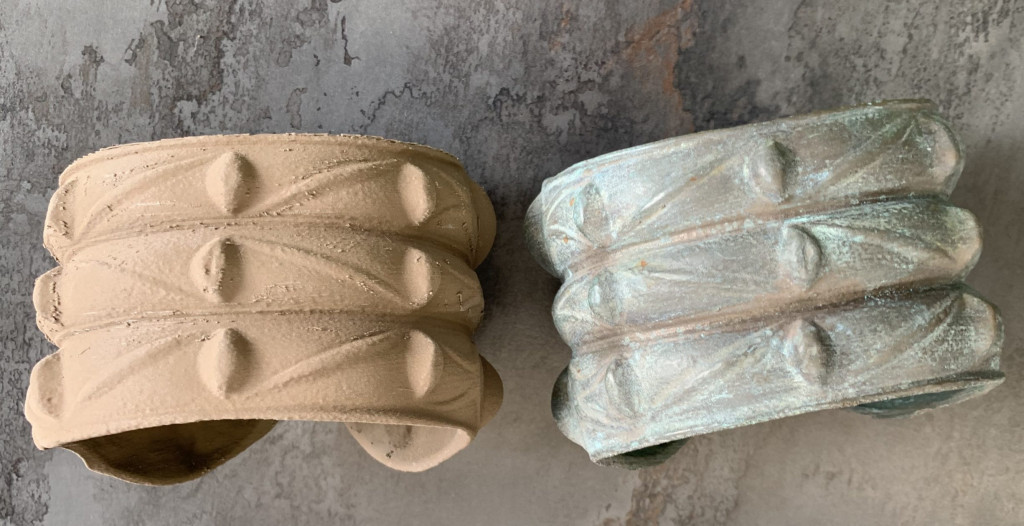 Previously I had a play with ColorFabb’s BronzeFill, this is a filament with 40% bronze and quite heavy. Once printed it is a rather boring dull brown color but it can be sanded and polished like ‘real’ bronze, this takes quite a bit of work but the rewards are worth it ( see picture above). I wanted these prints of an ancient Bronze armlet to look old so I ‘weathered’ them with a saturated solution of vinegar and salt, don’t use a suggestion I read of ammonia as the model will dissolve!

My first reel of filament printed fine but when I tried some months later, I kept getting jams on my Raise3D Pro Plus. The filament would load with no issue but would jam after an hour or so of printing. Then often it would unload fine, all very strange. I finally cracked it as a combination of changes which I will list here to help anyone avoid the weeks of trial and error I had.

6. The filament is very coarse so minimizing friction is a good idea so I moved the spool to the lower mount to give a straighter path and printed with the side door open as the spool often rubs on the door.

7. I also turned off retraction as this reduced filament movement in the extruder and as the final object will need manually finishing because of the nature of the filament then a few strands are not an issue.

With these changes in place I found that I could now print flawlessly with the BronzeFill that I bought direct from ColorFabb however a couple of reels of the ‘same’ filament that I bought from a seller on Amazon still would not print and would jam.

Looking at the two batches of filament, the boxes were different and I wonder if ColorFabb had changed the formula. When I asked them they said that they were now aware of a change of compound but pointed out the filament that would not print was produced in 2017 even though I bought it a month ago ! I would recommend only buying this filament and possibly the similar CopperFill direct from ColorFabb, I know I will in the future!

I hope this short article is of help to someone, this filament is expensive so failures are more than a little annoying. The basic principals of improvements of minimizing friction in the filament path, 0.6 nozzle and minimizing heat creep from the nozzle up to the filament might help with other printers.

This is a great filament and well worth the effort to print with it, the final objects are almost like the real thing in both loo, feel and weight.